Our case is in review. This is the sort of limbo that is frustrating as hell, because how long does it take to review a case? Either you need more information or you don't. I really want to schedule an appointment with the USCIS in Milwaukee just so I can talk to a person who can give me some straight answers. The US Immigration website is a pain to navigate through and there is nothing there telling you what kind of requirements you're expecting to uphold. And literally every form you have to file costs a minimum of $340.

It's been a long time since I actually posted about my life outside of gaming, so here's a brief recap of stuff:

I have money. I'm not out of debt entirely, but it's nice to be able to get a paycheck and not feel the need to deposit it right away. I just sat on my last paycheck for a week without depositing it into my bank account for no other reason than driving to my bank was out of my way. No longer living paycheck to paycheck is really awesome.

I'm still gaming. My Sunday night group has turned into a short-term Legend of the Five Rings game that Jake has been running. I've been playing an honorable Scorpion samurai who was forced into service of a young Crab shugenja. I'm having a lot of fun and I imagine we'll play that until Jake leaves Madison. Then I also started GMing for a Saturday group where I've been running a Stars Without Number campaign of my own design. I've posted a little bit about it, but I finished fleshing out the area of space they're in, and I created a handful of adventures that I could easily drop into a session. I don't know how long the group will want to play, but so far I've been having fun acclimating to a new group.

I'm writing a game. I've been collecting and reading and compiling so many OSR role-playing games lately that I decided to write my own. I've started looking at multiple systems and have been picking and choosing different things that I like about all of them. I don't know what my final game will look like, what it will be called or how it will even play, but it will be a labor of love. I've been devouring writing advice columns lately while I work out the mechanics of the game.

My mom is moving to Texas, and I'm moving in to her condo. I don't know yet if she is going to make this a temporary move or a permanent one. I'm looking forward to moving in to her place, cleaning it up, and making it sellable. She's had one garage sale to get rid of her stuff and is having another one this weekend. In about three or four weeks she'll leave town and I'll start moving my things into the condo, and paying my mom rent. She's not very good about taking my money though, so I'm thinking of setting up some form of direct deposit between our banks.

I'm getting married. We met online a little over a year ago, and we've visited each other several times over the last year. She lives in Canada and when we talked about one of us moving to the other's country we determined it might be easier and more affordable if she moved to the States to be with me. The next time I saw her after that I asked her to marry me. It's a pretty big change, and it's exciting and scary. I can't wait.

Minutia. I would update more often, but everything else I think about seems like minutia. Like, I found a copy of a softcore porno I saw when I was 11 years old that I've been trying to track down for a few years because it has never been released in the North American market. I've started purchasing original printings of classic Traveller books to have my own vintage collection. I'm going to get a new job, I don't care what it is as long as I'm not working 3rd shift, as soon as Marie moves in with me. I've been eating a lot of brats and root beer floats the last few weeks, which is bad because most of my pants are starting to get really tight around the waist. I still haven't finished all of the quests in Skyrim and I'm beginning to get annoyed that Fallout 3 and Fallout: New Vegas didn't have this much content in it - but now I'm really excited for Fallout 4 because I know it's development will have been informed by Skyrim.

And I can't think of anything else right now.

I'm returning to Madison in three hours. I can't sleep because yesterday I slept for 12 hours, and that was after taking a 4-hour nap in the same day. I guess I needed the sleep.

The day before I left I didn't get much sleep, presuming I would get some shuteye on the plane ride over to Boston, but I didn't sleep. As I sat on the plane waiting to take off, a very powerful fear of flying gripped my heart and proceeded to thump it against the inside of my ribcage. 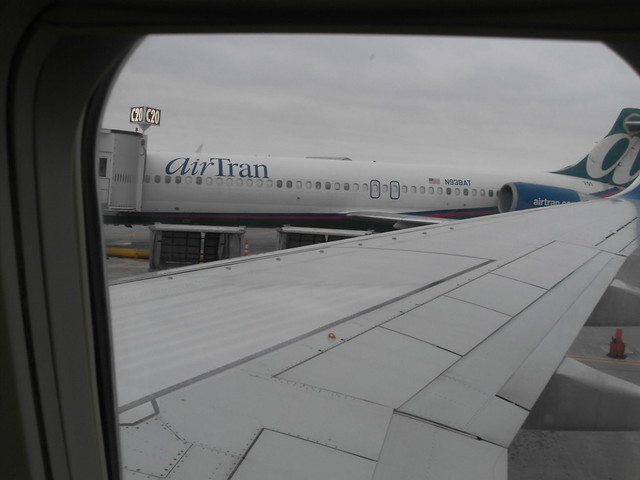 I assumed I might be able to take a short nap when I finally arrived in Boston a few hours later, but Ethan hadn't arrived yet so I had to wait around the main terminal for him to show up. Turns out, he got lost. Then he lost is parking ticket and his car is registered to his fiance, so the airport wouldn't let us drive away. So we ended up taking the train around to a few places in Boston, got something to eat, visited Ethan's comic shop of choice, and eventually headed back to his apartment.

This is Ethan and myself. 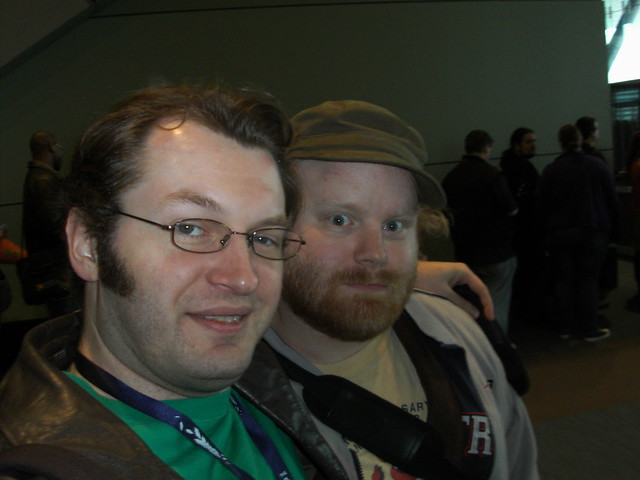 That night we played D&D with a few of Ethan's friends, half of whom were not sticking around for PAX, and I realized that I had been awake for 35 hours straight and the urge to sleep was coming on stronger than a lech in a dive bar.

The next day was Friday, PAX had begun. Ethan, Lisa and myself were joined by Josh and Casey, two of Ethan's college friends whom I had met before but never realized how geeky they truly are. Apparently, they attend both PAX Prime and PAX East every year.

Waiting to get in 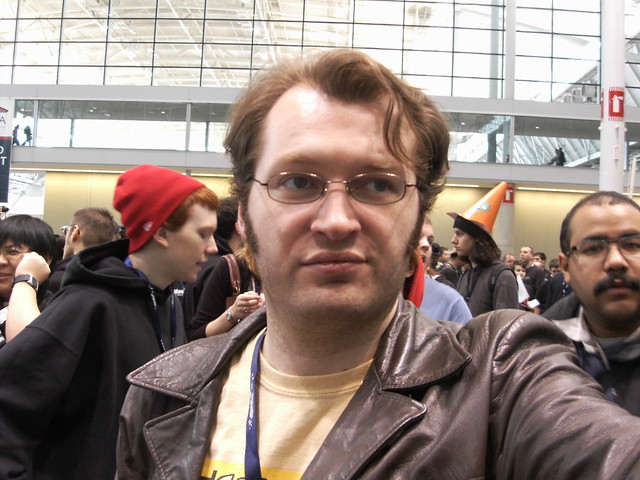 Now, to be fair, all three days of the expo somewhat run together in my mind. On Friday I met Luna and attended some of the first gaming discussions I've seen in over a decade. I got to play Fez and F.3.A.R. and the new LOTR game, I saw intense and deep previews for Portal 2 and L.A.Noire, I played a few board games I had never played before, I got to meet the designers of about a dozen indie games, and I got to meet the lead designer of the Burning Wheel RPG (who is a complete and utter asshat). I also got tons of free t-shirts, loot and swag - Stuff We All Get.

When it was all over, I took a nap, then I woke up, then I slept some more. A lot more. When I finally woke up on Monday, it was 3pm.

my bedhead is always awesome 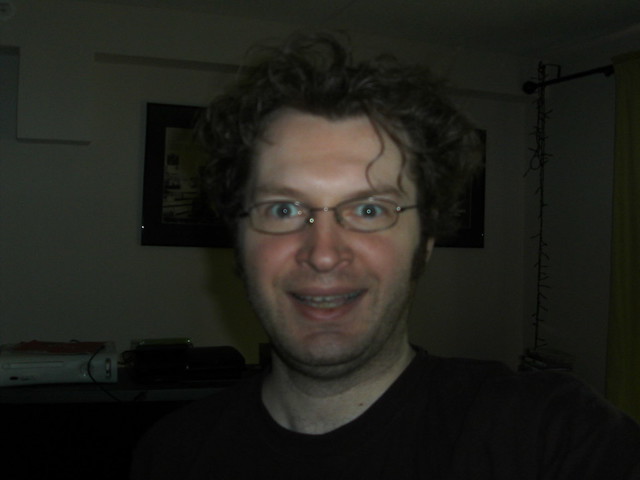 I played around on the internet, I played some video games on Ethan's Xbox, I played with Ethan's cat Thaddeus (who is super cute and purrs at me every time I rub his neck), and then when Ethan got home we left together to see the Phil Ochs documentary, There But For Fortune, and eat Korean barbecue.

Now I can't sleep, I'm just waiting to return home. To get Louis'es oil changed, to do laundry, to go back to my own bed, to get back to my routine. A routine that feels a little empty, except for that one day a week I get together with friends and we share a fantasy of warriors and rogues in a faraway land. And throughout all of this I have been sick. My dry cough turned phlegmy, and then it turned painful, and now I am still coughing and swallowing hard. I've been sick for over 7 days. If I hadn't dropped my insurance then visiting a doctor would be the first thing I do when I get back to Madison.

I did make one very big, very important realization on this trip: As long as I'm alone, I won't be happy. Gaming has always been a central part of my life, and it seems like almost everyone I know is married to a fellow gamer or has a partner who not just understands and tolerates it but actively supports them. This is probably the biggest reason why I'm single right now, because I no longer consider women as romantic options unless they have some stated level of geekiness that I know will be compatible or complimentary to mine.

If I could be said to have left PAX with only one thing, it was a newfound appreciation of indie developers and their games.

Anyway. I'm completely moved in and so the next few days and weeks will be me getting accustomed to my new place and putting up pictures and lights and junk. I've got one particular project that I hope to have finished by New Year's Day, so I'll post some more pictures once it's done. 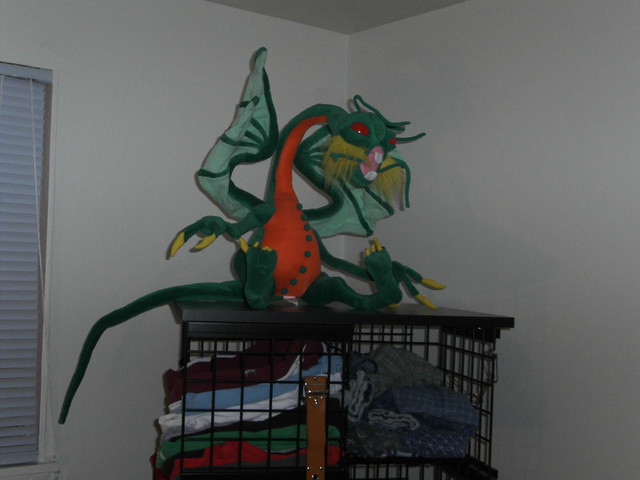 And here are (seven) more (big) pictures of my new apartment!

And since I do not have internet at my new place so that means I'm posting this from my mom's house. I'm about to head home right now and start unpacking and sorting all of the stuff I took over today, and after I took these pictures. Which means more pictures will be forthcoming!

I forgot to post these pictures before from my new apartment.

Me in my empty kitchen 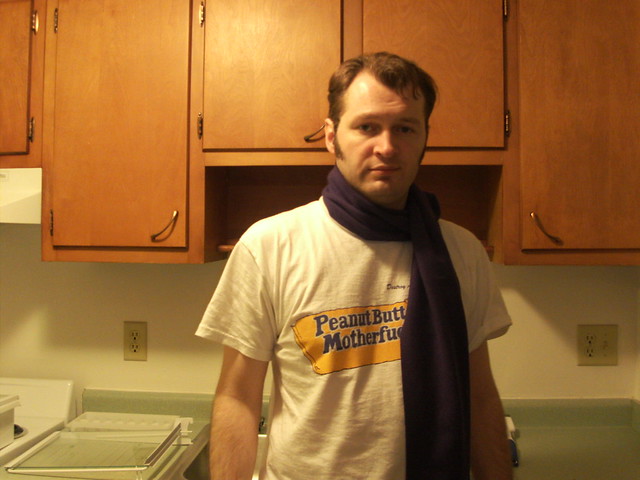 Me in my empty living room, before I moved in the TV and game consoles 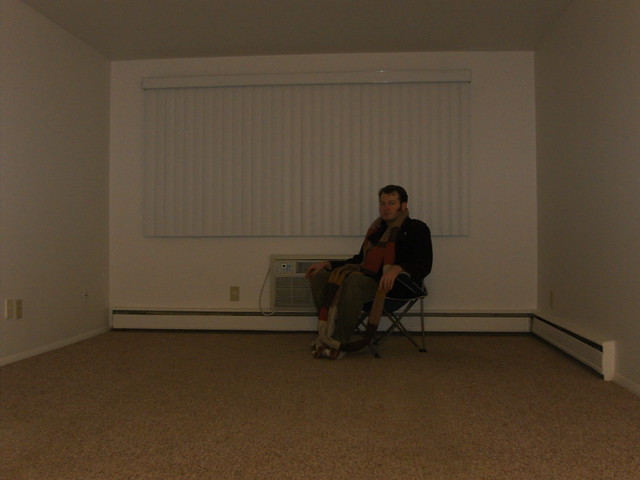 When I haven't been working or moving this last week, I've just been screwing off on the internet and taking pictures. I'm sure I'll post more tonight or tomorrow. The rest of today is going to involve me moving my bookcases over to the new place, and then trying to figure out where to put them all.

Also, I have no idea how to pack these guys! ( big image is bigCollapse )
Collapse